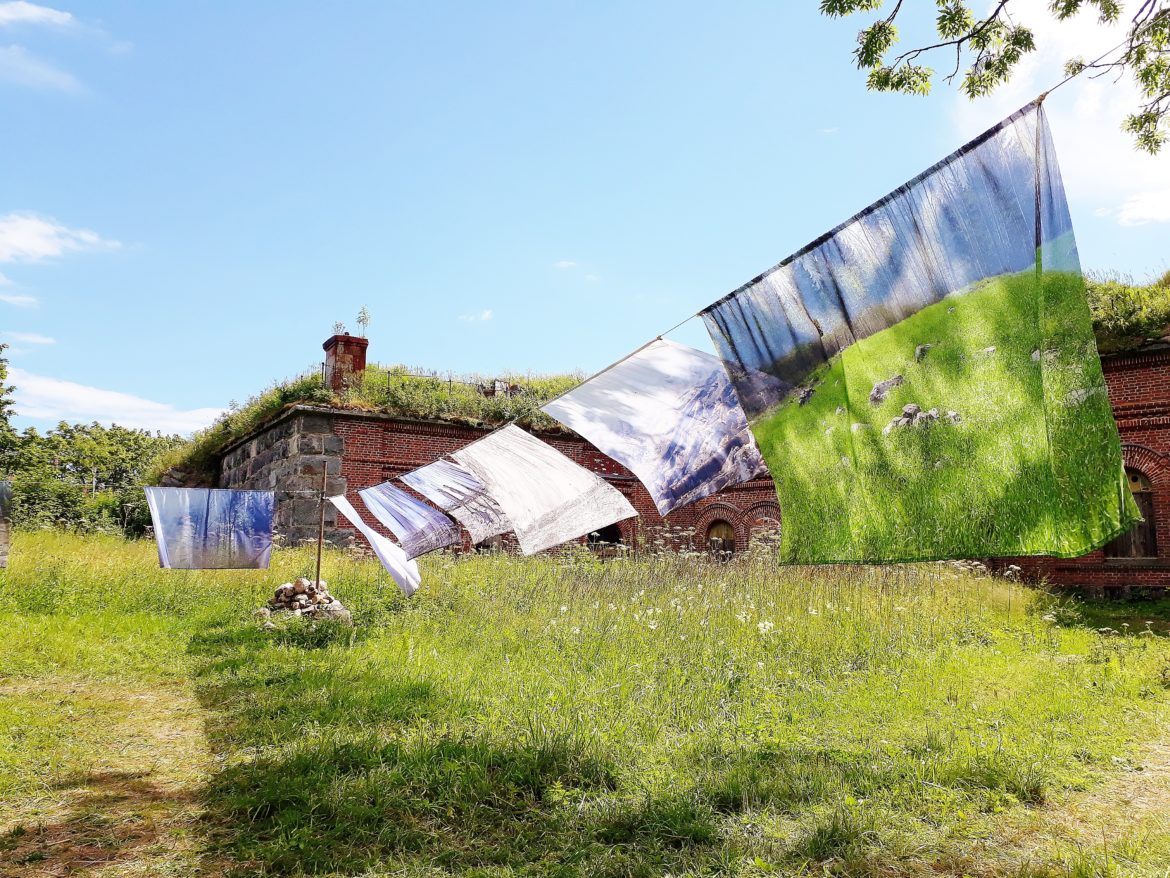 Crawling in the dark tunnels hearing drops of water hitting the tunnel floor. The closer you get to the other end, the brighter it becomes. You pop out in to the bright daylight and start climbing the stairs that nature has taken over. From the top of the stairs you see another old building peeking under some plants. You can’t resist the temptation and decide to go and take a closer look. You have stepped into an old bomb shelter.

Exploring the intriguing tunnels of the sea fortress.

You continue walking and you see trees that have been growing there freely for a long time. All the plants look incredibly vibrant and fully green. Beautiful trees crawl over you and you feel like you are in a Finnish style rainforest.

Vallisaari, an island with a sea fortress, is located just a short boat ride away from Helsinki city center and it opened to the public in summer 2016. I heard that the island has an untouched nature despite being so close to the capital of Finland. I also heard stories that there are some strict rules attached to this island that you cannot for example step away from the beaten paths. I wondered why and it all cleared to me when I visited the island.

Bomb shelters from the 18th century.

In Vallisaari island you are not allowed to wander off the beaten path because there is a possibility of explosive remains in the nature. There is a real threat that they might explode when stepped on – sounds pretty dangerous, eh?

The history of Vallisaari (“Barrier Island”) can be described with one word: captivating! The danger of Vallisaari dates back to an explosion in 1937 when an industrial building full of explosives blew up. The people needed to flee from the island and the island got the nickname “the Valley of Death”. The village that used to be full of life resembles more of a ghost town nowadays since most of the buildings are inhabitant. You can see that in most of the buildings no one has lived for a long period of time and plants are taking them over. Some buildings are preserved like the old fire station.

Nature has taken over the buildings.

Vallisaari has the most pristine nature of all Helsinki. It was closed for such a long time that the nature took over the buildings and paths. Even though it’s prohibited to step outside the paths you can still see a large variety of different flowers, plants and trees. It is lovely to see how the nature is fully alive there. In the inner parts of Vallisaari and its neighboring Kuninkaansaari (“King’s Island”) there are a few beautiful ponds and the islands also provide a home for quite a large variety of bats which gave them the nickname “the islands of ponds and bats”.

Due to the explosives that still lie on the ground it is prohibited to stay overnight in Vallisaari. Also open fire isn’t allowed on the island for obvious reasons. You will get your sausage well grilled when the ground explodes.

Vallisaari is definitely a destination also for children

Kids are super excited when they can explore the dark tunnels and mysterious buildings covered by plants. The island is accessible with strollers. Small children should be looked after since there is a real danger waiting if they run off the paths.

The main part of the sea fortress protects the island from the marine attacks.

In Vallisaari you can take two different routes.  The first route only covers Vallisaari island and the second route takes you to the island next to the Vallisaari called Kuninkaansaari (“King’s Island”). The kings island was the main fortress of the Swedish marine during years 1773-1790 when Finland was part of Sweden.

Way up to the fortress walls – wait for the view!

In Vallisaari island lies the real heart of the island, there is the main part of the fortress which is definitely worth seeing as well. On the top of the walls there’s a beautiful view over the ocean to the archipelago and to Helsinki city center.

In the other hand Kuninkaansaari is less crowded than the main island and you can see fortress tunnels that are not cleared from the nature. In that island you feel like you’ve discovered something old and pristine.

From the walls of the fortress there is a perfect view over the sea.

You know when you have found the cafees of the island because you will feel the irresistibly delicious scent of grilled meats and frying crepes.

There’re many lovely cafees on the island. You can get food from proper lunch to crepes and ice cream. I don’t want to recommend any certain cafe since they are all so good! Just go and take a look! You can decide by what you fancy that day.

How to get to Vallisaari?

You can get to Vallisaari from Kauppatori pier with two different ferry operators. They are JT-Line and Aava Lines. They operate around every 15 minutes. You can take the same ferry to Vallisaari and to the other popular fortress island called Suomenlinna. It’s easy – just buy the return ticket! NOTE: Vallisaari is only open during the summer.

I hope you will also find your way to beautiful and intriguing Vallisaari island!

What a beautiful day it was in Vallisaari!

Daytrip from Helsinki to Remember: The Beautiful Pastel Houses of Old Porvoo

Interesting place. Who knows how it would have looked like today, if it weren’t for the explosion.

The first picture reminds me a little bit about the Hobbiton from New Zealand. Only that one was man made to look like that, covered in grass.

It’s always nice when you discover new places, where you can have peaceful walks and enjoy natures, near the big crowded cities.

So true, it could look completely different! I was also surprised how much it looked like Hobbiton there. 🙂 I do agree. So lovely to discover new places!

The picture titled nature has taken over the buildings reminds me of fairytale days. Would have loved to check out the tunnels. This is so beautiful. I wish I had known about this island when we visited Suomenlinna.

I’m glad you enjoyed reading my article! 🙂 Maybe next time when you visit Finland you will see this beautiful island! Just remember that it is open for public only in the summertime. 🙂

Wow! interesting place. I will visit it when possible.
Thanks for sharing!

I’m so glad you enjoyed reading my article! 🙂 I hope you get the chance to visit Vallisaari. It is definitely a place worth visiting!